Big News! The FAA has dropped the requirement to use a complex aircraft for the commercial or CFI check ride!

So, you can now complete your Commercial license in your favorite Cirrus. And take it from someone who did their commercial single-engine add-on in a Cirrus under the old rules, this new rule will provide a much more viable and rewarding experience for you! 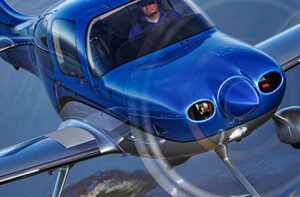 Why? Well, I initially learned all my commercial maneuvers in the Cirrus, and under the old rules, had to complete my CFI Add-On (I did my CFII as initial in the Cirrus) in a complex aircraft, which meant doing so in an old Cessna. After flying a Cirrus, having to learn—and demonstrate—the Commercial maneuvers in a circa-1970s aircraft, I couldn’t believe what a bore it was and how you lose so much of the “feel” those maneuvers are explicitly designed to teach you. Take it from me, you’ll have a blast practicing your chandelles, steep spirals, lazy 8s, and all the rest in a Cirrus!

Still On The Fence?

The one thing we still hear day in and day out is the outdated argument against learning to fly from ‘zero hours’ in the Cirrus. In general, this premise (or propaganda, as we think of it), is that it’s easier and less expensive to learn in older, less capable aircraft. Sure, you can go to an older school and fly at a cheaper rate per hour, but soon you realize you’re flying old, tired, technologically inadequate aircraft. And before long, you’re coming to CalAir to transition into what you really want to fly—a new and much more capable Cirrus.

In actuality, if you add the transition cost to the “true” cost of getting a Private Pilot license at an older school (and yes, we see a lot of low-ball quotes from flight schools!), the numbers work out to be the same in the end. You might as well have been flying a modern, safer Cirrus the entire time!

Furthermore, with the FAA’s regulatory changes coming in the next year and a half, the odds are that the plane you’re flying now at an older school/rental facility will not even be airworthy! Of course, the school will likely not offer this information, nor do they have a game plan in place to ensure that the airplanes you’re flying now will still be available to you in the very near future. All the reason more why you’re actually throwing money away flying older airplanes.

Keep up with the times and new safety regulations…and maximize your investment into your passion and hobby. Come fly our all-Cirrus fleet here at CalAir!